Heritage and Survival: The Power of Agricultural Knowledge in the People’s Republic of China (current book project)

Agriculture sits at the intersection of our world's most crucial struggles: it is a matter of who eats, who labors and how that labor is recognized, whose traditions are preserved, how political and economic power is distributed, what happens to local ecologies, and how much carbon we can sequester to slow climate change. China -- with its deep identity as an ancient agricultural civilization, its more recent history of socialist revolution and economic development, its vast and rapidly transforming population of farmers, and its formidable environmental challenges -- stands as a source of both inspiration and anxiety for people around the world grappling with the future of food.

Through a series of engaging case studies of agriculture in socialist and post-socialist China, this book will explore the intertwined themes of knowledge, environment, and history, while confronting the thorny dilemmas of state power, capitalism, and technocracy. What is "traditional agriculture," how is it being used to envision the future, and when does it promote survival or exploitation? What is an "agroecological system," where did this concept come from, and how does it relate to political ideologies -- both liberatory and oppressive? What is "food sovereignty," where are its roots in the Maoist past and ongoing transnational social movements, and what is its potential for building just and sustainable agricultural practices? Beyond these questions, topics will include agroecology, systems science, agricultural heritage studies, mass science and indigenous knowledge, participatory action research, and the relationship between ecocivilization and ecoauthoritarianism. Specific agricultural technologies discussed will include integrated fish farming, terracing, plant-based insecticides, "Chinese medicine agriculture," and networks for seed preservation and exchange.

The Critical China Scholars formed in 2020 in the face of the COVID-19 crisis and worsening US-China relations. CCS is committed to offering informed, critical analysis on China that focuses on the root causes of injustice — including capitalism, authoritarianism, imperialism, racism, and patriarchy — that transcend national boundaries. We oppose the dangerous rhetoric that demonizes the PRC and its citizens, and subjects those of Asian appearance to racist prejudice. At the same time, we recognize the justice of movements that resist oppression by the Chinese state, and we stand in solidarity with political activists fighting for labor, gender, ethnic, religious, and environmental justice. We refuse to allow one priority to outweigh the other. Please see our website for our full statement of principles and for a video and audio archive of our two-part event, "Viral Politics: Left Perspectives on the World and China."

Revitalization of Science for the People 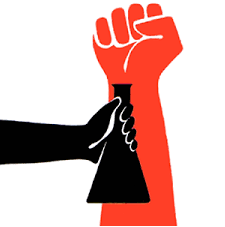 In the years since the UMass conference "Science for the People: The 1970s and Today," organizers around the country have taken up the work of revitalizing SftP. I am proud to be a part of that effort. We had our first national convention in February, 2018 in Ann Arbor. There are now chapters in numerous places around the U.S., along with an affiliated organization in Mexico City. Our local Western Mass chapter is focusing on: 1) community solidarity work with Arise for Social Justice around mold hazards, air pollution, and other environmental justice issues; and 2) developing K-12 science and social justice curricula. Check out this article by Rebecca Onion in Slate: "A Radical ’70s-Era Group Is Relaunching to Help Scientists Get Political Under Trump".

I am the editor of a book series with UMass Press titled "Activist Studies of Science and Technology." The series publishes accessible, engaging books on science and technology in support of movements for justice and sustainability around the world. The first book in the series was published in 2022: Steffan Blayney's Health and Efficiency: Fatigue, the Science of Work, and the Making of the Working-Class Body. We have more projects in the pipeline and are continuing to invite manuscripts in these areas:

Union Organizing: MTA/MSP All In Campaign

In anticipation of the recent Janus decision by the U.S. Supreme Court, the Massachusetts Society of Professors and our parent union, the Massachusetts Teachers Association, launched an "All In" campaign. We know that workers do better when we are unionized, and we know the essential contribution labor organizing has made to social and economic justice in U.S. history. Now more than ever we need to commit ourselves to building the labor movement. I am proud to be a vice-president of the MSP charged with leading the All In campaign at UMass Amherst.

Moth and Wasp, Soil and Ocean: Remembering Chinese Scientist Pu Zhelong, illustrated by Melanie Linden Chan (Tilbury House, 2018). See also this related blog post: "Exposure Therapy: What I Learned Writing My First Book for Children." Teachers may appreciate this hour-long webinar (made available by the Five College Center for East Asian Studies), where I talk about the larger historical themes and offer a page-by-page discussion using Meghan Dowd Lambert's "whole book approach" to reading picture books. This Reader Guide offers discussion questions and activities for use in the classroom.

Winner of the 2018 Freeman Book Award for children's literature on East and Southeast Asia; winner of the 2018 Sigurd F. Olson Nature Writing Award; named a Notable Social Studies book for 2019 by the National Council for the Social Studies (NCSS) and the Children’s Book Council; and listed as a CCBC Choices 2019 book by the Cooperative Children's Book Center of the School of Education at the University of Wisconsin-Madison.

Please see this list of Five "Best Books on Inspirational Scientists for Children" that I created for Shepherd.com.

Red Revolution, Green Revolution: Scientific Farming in Socialist China (University of Chicago Press, 2016). Winner of the 2018 Joseph Levenson Book Prize (for books on China, post-1900) from the Association for Asian Studies. Carla Nappi of the New Books Network interviewed Sigrid about this book. Listen to the podcast here.